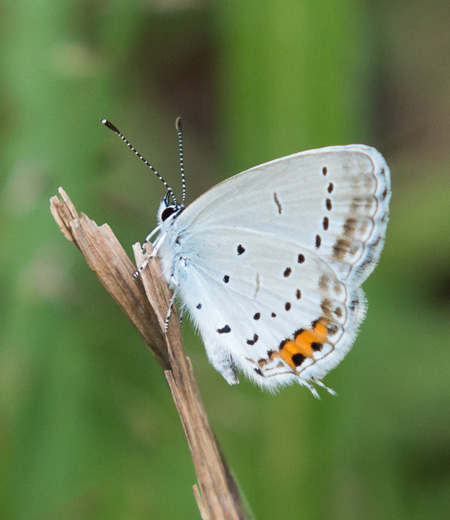 Everes argiades (Short-tailed Blue) Lycaenidae
Main Region: Hokkaido, Honshu, Shikoku, Kyushu and Tanega Island and Yaku Island.
Found in sunny grasslands and woods from flatlands to low elevations.
Wing color on male is blue-purple with darker colored edges.
Female is mostly black-brown but some are blue colored.
The back of wings is light gray with some black spots and orange patterns on the bottom of hind wings.
Have elongated tails on the bottom of hind wings resembling tails of barn swallows, hence the Japanese name Tsubame-shijimi literally meaning barn swallows lycaenidae.
However, most of butterflies in lycaenidae have similar tails like this species.
Is active during daytime in grasslands and forests and feed on nectar from Japanese clover.
Caterpillars feed on flowers and sprouts in fabaceae family including white clover and indigofera pseudotinctoria.