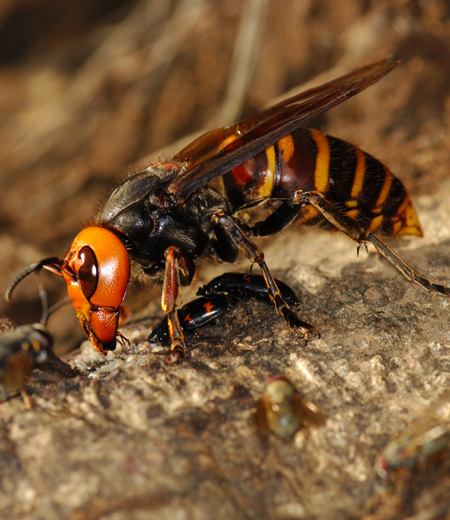 Vespa mandarinia japonica(Japanese Giant Hornet) Vespidae
They live widely in Hokkaido, main land Honsyu, Shikoku, Kyusyu as well as Yakushima Island and Tanegashima Island.
Thought they inhabit in plain ground and low-mountain areas, they also go out to residential districts.
As largest species of Japanese bees, the striped patterns of thick orange color and black color on their body accentuate them very much.
Their dwelling is the den made under the ground, where they usually inhabit.
Carnivorous as they are, their main bait is mainly big insects; meanwhile they attack the other bees’ dwelling in the group so that they can get other’s pupae and larva for their own feed.
Sap from copse trees is also where they like to gather.
They are very notorious for its aggressiveness and have deadly poison which can stab human to death.
The point is that when you see them or hear the sound of flapping wings ‘Buz’, don’t be upset or panicked to leave there at ease.
Another point to remember is that they gather at sweet drinks or Bento.