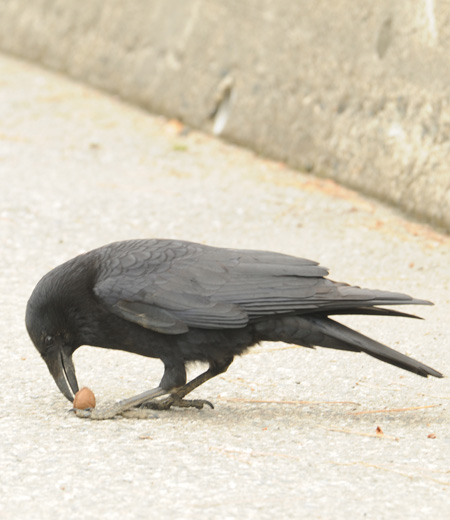 Carrion crow (Corvus Corone) Jungle Crow
Found in forests from flatlands to low elevations, croplands and cities. Compare to jungle crow, this species have more round-shaped head and thin bill. Chirp “cow cow” while moving head downward like bowing, and some species chirp sounding like “capon capon” or “ca la la la”. Are normally in a group except breeding season. Fly to areas where they can hunt for preys including croplands and riverbeds from early in the morning and come back to the same place to rest. Are omnivorous and feed on earthworms, frogs, fish, bugs, seeds of plants and nuts of trees and also raiding garbage in cities. Are attracted to objects that reflect lights and often take golf balls away from golf course. The breeding season is from March to May. Build a ball-shaped nest at the upper parts of trees with twigs and lay three to six eggs in a season.