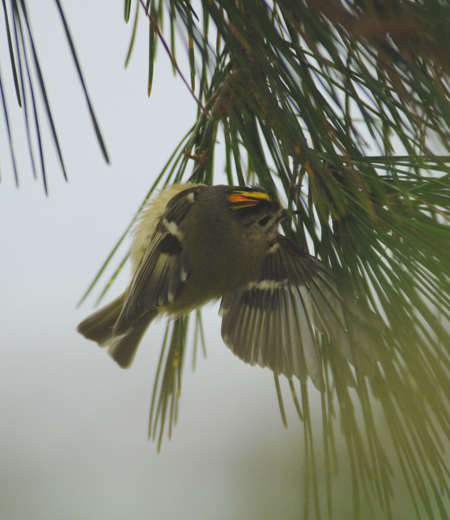 Regulus regulus (Goldcrest) Goldcrest
Is one of the small birds in Japan like wren and weight about 5 to 6 grams. Have chrysanthemum-like yellow feathers on the head, hence the Japanese name Kiku-itadaki literally meaning chrysanthemum on a head. The body color of male and female is almost the same but male have red line on the head. Live on needle-leaved trees including pine trees and Japanese cypress and move frequently among trees and hunt for bugs and spiders. Live mostly on trees and come down to the ground only for bathing. Chirp sounding like “tu li li li tzee” with metallic and thin tones. The breeding season is from June to July. Build a ball-shaped nest with moss and spider’s thread on a branch and lay five to eight eggs in a season. From autumn to winter, move to flatlands to low elevations and are in a group with coal tit.

●Body Length  about 10 cm
●Season  January to December (resident bird, bird that stay in the same area all year round.)