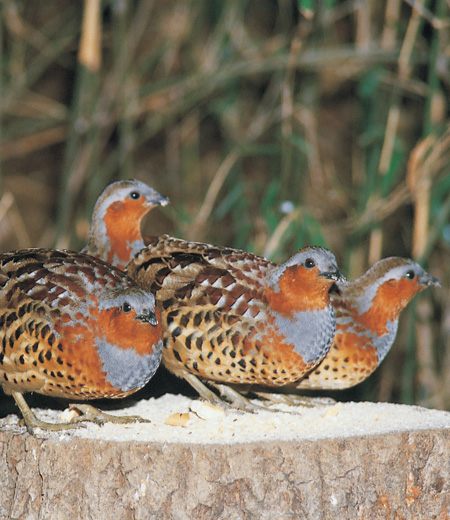 Bambusicola thoracica (Bamboo Partridge) Bamboo Partridge
This is a foreign species native to southern China. After released 20 of them in Tokyo and Kanagawa prefectures in 1919 (Taisho 8), they are now distributed throughout Japan. They are found in woods, shrubs and grasslands in flatlands. They live in a group from autumn to early spring and feed on seeds, nuts, young leaves and buds of trees and earthworms. Their voice sounds like “come here” (chottokoi) in Japanese and had often been used in TV programs, movies and samurai dramas as the birds that live in satoyama (satoyama is where residential area and woods space coexist in a rural area). The breeding season is from May to June. They dig shallow holes in shrubs and build a nest with fallen plants and lay seven to eight eggs in a season.

●Body length  about 27 cm
●Season  January to December (resident bird: a bird that stays in the same area all year round)