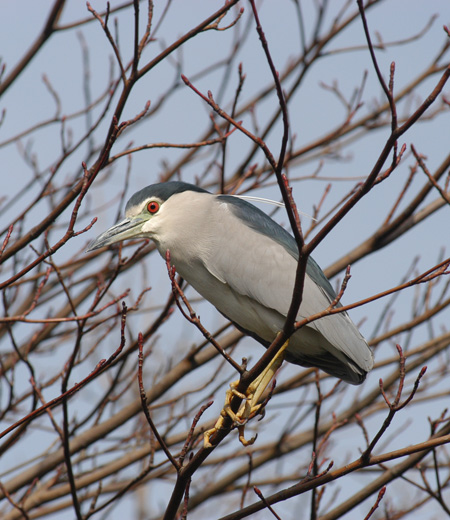 Nycticorax nycticorax (Black-crowned Night Heron) Egret
Just like other species in the Ardeidae family, they create the habitat area called colony in forests from flatlands to hills. They stay in a colony during daytime and hunt for fish, frogs and crayfish at waterside such as rivers, bogs and ponds at night. They wait for preys to come closer and catch immediately with bills. Males and females have same body color and there are people who say that they are like penguins. Adults have two decorative feathers on the back of a head. The young adults have white patterns on the brown body. They are called Hoshigoi and look completely different from adult birds. The breeding season is from April to August. They build nests with twigs on trees in a colony, and lay four to six eggs in a season.

●Body Length  about 57 cm
●Season  January to December (resident bird: a bird that stays in the same area all year round)
※Quotation from Mount Takao formula application
もっと見る 閉じる