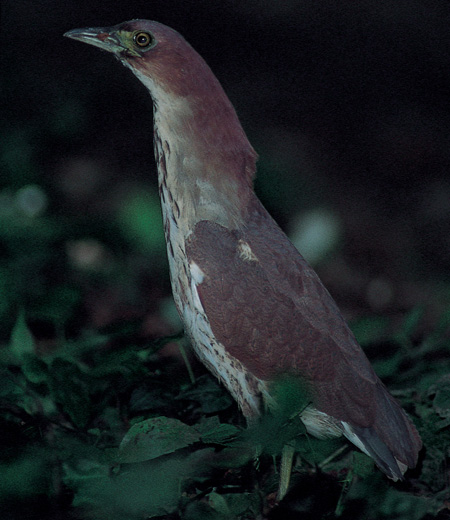 Gorsakius goisagi (Japanese Night Heron) Egret
This is in the Ardeidae family and breeds during summer only in Japan. They live alone or in pairs in shady forests near streams of low elevations. The body color is dark brown for both males and females. They rest under shrubs during daytime and become active in the late afternoon. They hunt for earthworms, crayfish, frogs and fish in streams or ponds. When feeling danger, they lift a bill upward and stand still camouflaging their body to tree branches. The breeding season is from May to July and the males chirp “boo boo” with low voices repeatedly to ask females to mate. They build a dish-shaped nest with twigs on a branch extended over streams and lay four to five eggs in a season. After parenting in summer, they fly to Southeast Asia to spend winter.

●Body Length  about 49 cm
●Season  April to September (resident bird: a bird that stays in the same area all year round)
※Quotation from Mount Takao formula application
もっと見る 閉じる