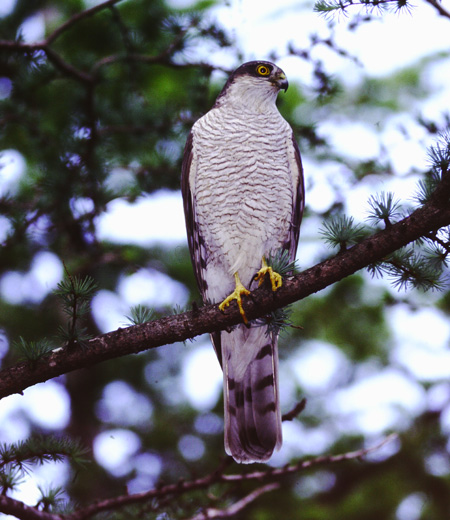 Accipiter nisus (Sparrow Hawk) Buzzard
A kind of hawk found in forests from flatlands to 1,700 meters elevations. Have short wings with four black belt-like patterns on long tails. Most of them live in pairs during breeding season but alone except that season. Mainly feed on rufous turtle dove and great spotted woodpecker but sometimes rats. When sensing dangers, threatening enemies or giving preys to female, chirp “qui qi qi qi” with high tone voice. The breeding season is from early May to mid June. Build nest with layers of twigs at the base of branch and lay four to five eggs in a season. After nestling, come out to forests in low elevations, croplands in flatlands and cities to chase groups of bramblings and tree sparrows and spend winter.

●Body Length  Male about 32 cm, female about 39 cm.
●Season  January to December (resident bird, bird that stay in the same area all year round, and wandering bird, bird that have different areas for breeding and spending winter)
※Quotation from Mount Takao formula application
もっと見る 閉じる