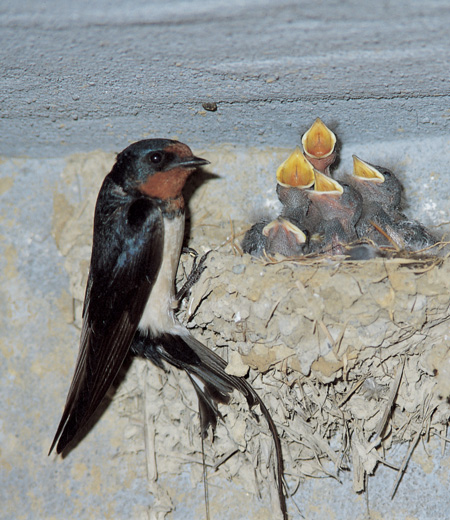 Hirundo rustica (House Swallow) House Martin
Fly back to Japan in early spring from Southeast Asia where they spent winter. Is the most commonly known bird nest on the walls right near the ceiling. Live in open croplands, paddy fields and waterside and often seen in cities. Fly low over croplands and catch flying bugs and drink water like scooping them during the flight. Live in pairs during breeding season and often fly back and forth from the nest to paddy fields and riverbeds to collects muds and dried leaves for building a nest. From April to July, lay one egg per day and three to seven eggs in total in a season. After nestling, move to grasslands with common reeds grow and live with a small group. In autumn, fly to south.

●Body Length  about 17 cm
●Season  March to about October (Summer bird, fly to one area from spring to summer for breeding and fly back to southern areas in autumn.)
※Quotation from Mount Takao formula application
もっと見る 閉じる