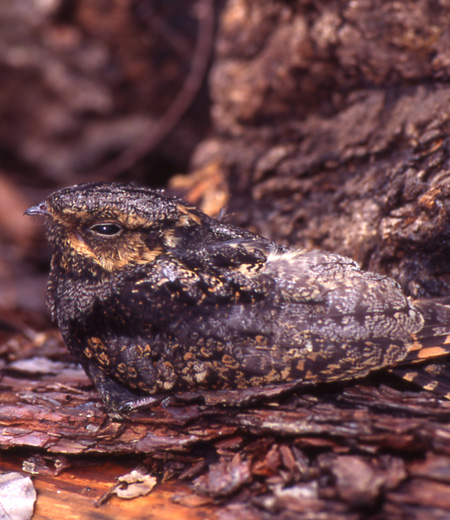 Caprimulgus indicus (Jungle Nightjar) Jungle Nightjar
Found in grasslands and mountain forests. Sleep on tree branches during daytime and become active in late afternoon. Open wide mouth and hover low without making sound with feathers and suck moths or gold beetles that comes into their mouth. The body color of male and female is almost the same and black brown body with fine complicated patterns. The breeding season is from May to August. Male hold territory and fly over trees and chirp “qyo qyo qyo”. Does not build a nest and lay two to three eggs in a season on the ground covered with leaf soils in open areas in forests. In autumn, fly to Southeast Asia to spent winter.

●Body Length  about 29 cm
●Season  April to about October (Summer bird, fly to one area from spring to summer for breeding and fly back to southern areas in autumn.)
※Quotation from Mount Takao formula application
もっと見る 閉じる