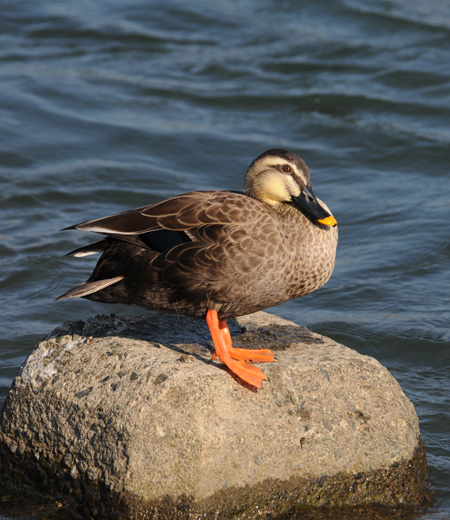 Anas poecilorhyncha (Spot-billed Duck) Duck
This duck is distributed throughout Japan. They are found in the waterside including lakes, ponds, rivers, paddy fields and ponds at parks. They raise chicks even at man-made ponds at office streets in cities often covered on TV programs. Most female ducks have brighter colored wings but this species has almost the same color with males. They are normally active at night but after increased in number, they are often seen eating food at parks in cities during the daytime. They prefer fruits of plants but they are omnivorous and also feed on fish and insects. The breeding season is from April to early July. They build a nest with fallen leaves and plants covered with feather of parents’ breast in shrubs near waterside and lay eight to thirteen eggs in a season.