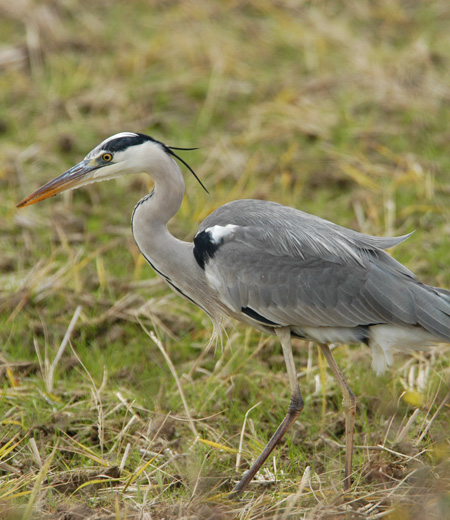 Ardea cinerea (Grey Heron) Egret
This is the largest heron distributed in Japan. They have skinny bodies with long legs and necks. The body color of males and females is bluish gray. Adults have decorative black feathers on a head but not on young birds. They live near coastline, mudflats, rivers, lakes, ponds and swamps, and sometimes come to streams on Mt. Takao. They rest in a group during daytime and hunt for preys from late afternoon to the following morning. They feed on fish, frogs, crayfish and sometimes snakes, rats and baby birds. They catch small fish with a bill and catch large fish by piercing them with the tip of a bill. They build a colony for breeding and build a dish-shaped nest with twigs on tall trees in forests. The breeding season is from April to May and they lay three to six eggs in a season.

●Body Length  about 93 cm
●Season  January to December (resident bird: a bird that stays in the same area all year round)
※Quotation from Mount Takao formula application
もっと見る 閉じる