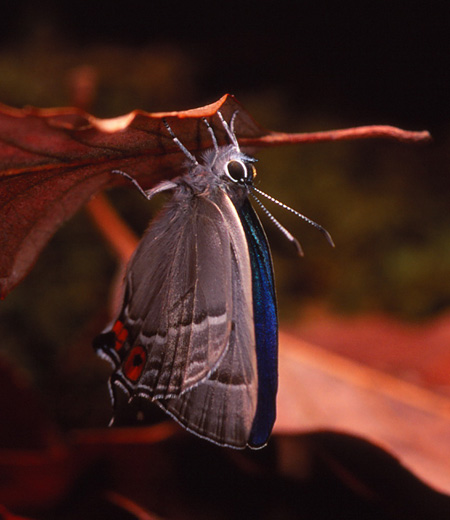 Favonius orientalis (Oriental Hairstreak) Lycaenidae
Main Region: Hokkaido, Honshu, Shikoku and some parts of Kyushu.
Found in woods and forests from flatlands to high elevations.
Wing color of male is metallic blue with thin black edges that are very beautiful.
Female is somber with dark brown.
The back of wings is gray-white with orange spots at the bottom of hind wings.
Male holds territory at mountain peaks and mountain ridges and fly routinely within the territory.
Is active mainly in the morning and feed on nectar of Japanese chestnuts.
Female is not as active as male and rest on grasslands and under the trees of quercus serrata, quercus crispula blume and quercus acutissima.
Caterpillars feed on leaves of plants including quercus serrata, quercus acutissima and daimyo oak.
Adults emerge in early summer and live only for about one month.