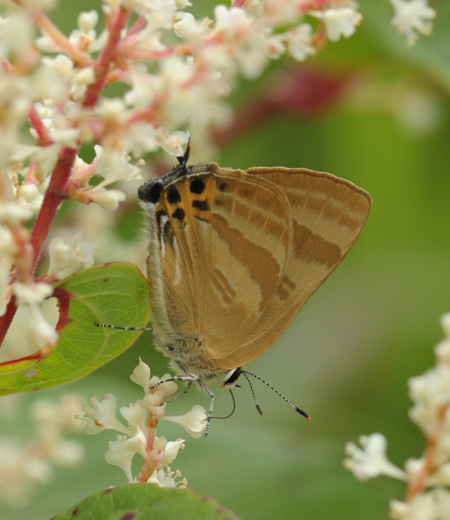 Rapala arata (The Japanese Flash) Lycaenidae
Main Region: Hokkaido, Honshu, Shikoku and Kyushu.
Found in woods and forests along rivers from flatlands to mountain, and also at parks in cities.
Wing color on the front is dusty dark blue and on the back is white and brown stripe-like pattern, hence the Japanese name Torafu-shijimi literally meaning tiger patterns lycaenidae.
Adults emerged in spring have more distinct white stripe-like patterns compare to the ones in summer with more brownish white and white part is less appealing.
Some parts on the back of hind wings are orange and tails on the bottom is long.
Fly fast but does not go long distance and frequently rest on leaves of trees.
Is active during daytime and feed on nectar of Japanese chestnuts.
Caterpillars feed on flowers and sprout of Japanese wisteria and vicia cracca.