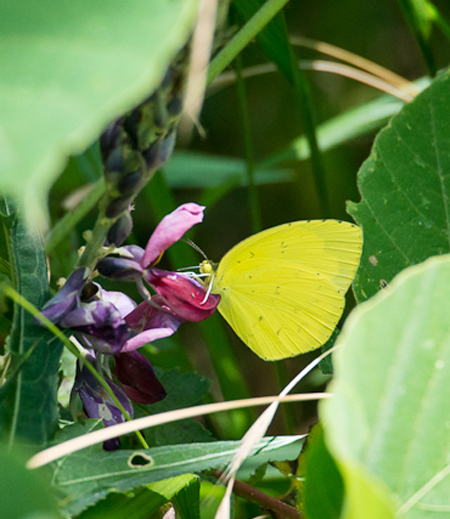 Eurema mandarina mandarina(Common Grass Yellow) Pieridae
Main Region: Honshu, Shikoku, Kyushu, Okinawa, Sado Island, Yaku Island, Ishigaki Island and Iriomote Island.
Common Grass Yellow is the different species found in south of Nansei islands.
Found in sunny grassland and forests from flatlands to mountains.
Is seen from early spring of about March and found even at parks in Tokyo.
Wing color is generally yellow on both sides and male is deeper yellow and female is lighter yellow.
Have black colored edges.
Some have black spots on the back of wings but some do not.
Fly over sunny grasslands or forests and feed on nectar of bush clover, cisium and bidens.
Caterpillars feed on plants in fabaceae family including mimosa.