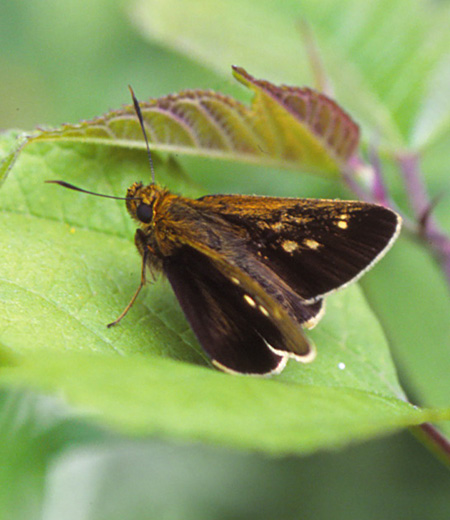 Thoressa varia (Japanese Swift) Hesperiidae
Main Region: Hokkaido, Honshu, Shikoku and Kyushu.
Found in forests and bushes from flatlands to mountains.
Often found in bamboo bushes with sasa veitchii and sasa nipponica as caterpillars feed on plants in sasa genus.
Wing color on the front is brown-black and yellow-brown closer to the body with some white spots.
On the back is yellow-brown with black lined wing veins and some whitish yellow spots.
Fly fast and straight in bamboo bushes and woods during daytime and feed on nectar of boneset and azalea, and also on dungs of animals.
Suck water in groups. Male holds territory.