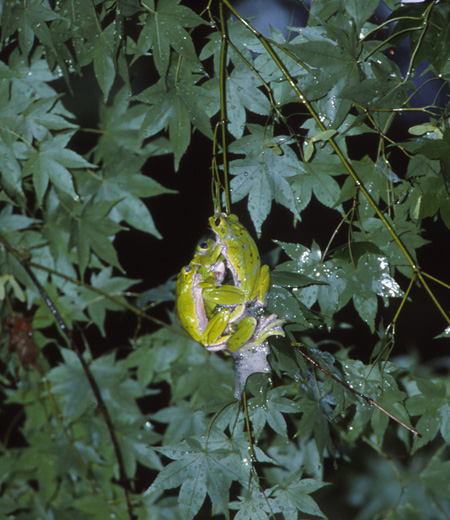 Rhacophorus arboreus Schlegel’s Green Tree Fro
They live widely in Hokkaido, main land Honsyu, Shikoku, Kyusyu as well as Osumi-shoto Islands and Izu Peninsula.
As their name show it, they inhabit in the woodland, adults dwell almost on the trees. On occasion, they live in the forests of Buddhist temples and Shinto shrines with ponds, they are designated as a protected species in many inhabitant places.
Some are tinged with green with the back in dark green. Some are tinged with green with the red-brown patterns.
They resemble Rhacophorus schlegelii, but Rhacophorus arboreus has larger bodies and the red color around eyes, which is how to distinguish the two.
A male’s chirp sounds like ‘KO-KO-KO’ or ‘KA-KA-KA’.
From late April to July, 1 female and several males lay eggs on the branches that protrude over the water.
These eggs are wrapped within meringue-like smother.
The eggs incubate in 7 – 10 days to change into tadpole, and fall into the water.


Size  Male: about 40 to 60 cm, Female: about 50 to 75 cm
Season  April to about October
※Quotation from Mount Takao formula application
もっと見る 閉じる