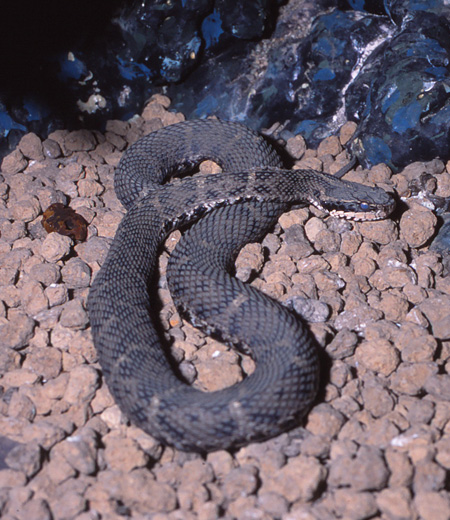 Gloydius blomhoffii Viperinae
They live widely in Hokkaido, main land Honsyu, Shikoku, Kyusyu as well as Osumi-shoto Islands and Izu Peninsula.
Mainly they inhabit in the bushes along the mountain streams at low lands, in the forest, and woods in the mountain district, but we sometimes see them in arable land.
They are very notorious poisonous snake, and there are so many incidental deaths that people die.
Their body is tinged with pale dark brown as base, usually have elliptically-shaped mottles with black mottles in their center in line, while some tinged with strong red, some entirely in black.
There are varietas. Basically, they are nocturnal animal, around the time when temperatures were much lower, they are active even during the daytime.
We sometimes see them at Mt. Takao, we, ordinary mountain climbers hardly come across them if we walk within the specified Trail rout areas.
If we happen to encounter them, keep our hands off, keep ourselves away 1m away, and let them pass, they do not attack us.
Their main bait is such small animals and insects as rats, lizards, and frogs.
They can use a sense of vision and a sense of smell as well as an organ called ‘a pit’ near the nose to detect infrared-ray to find baits.
They are an ovoviviparous animal (Rantaisei: a female spider hatches the eggs inside their own body, and then lays them as baby spiders), lay about 10 baby spiders from the end of the summer till he autumn.