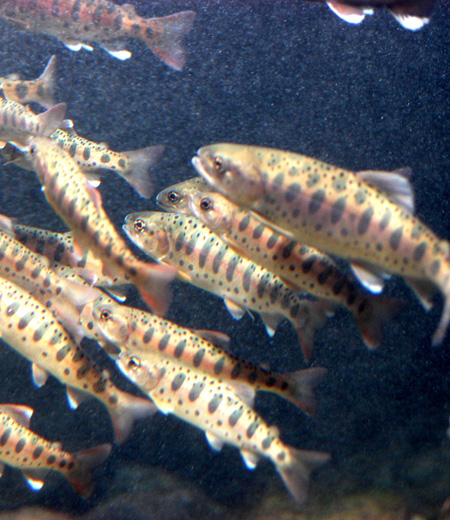 Oncorhynchus masou masou (Seema) Japanese Dace
The Japanese name Yamame is not this species’ name but all species in seema that remain in rivers and not travel to the sea. Main region is Hokkaido, Honshu (north of Kanagawa prefecture), Shikoku (except Seto Inland Sea) and some part of Kyushu. Found in fresh upstream which water temperature is below 20 degrees. Feed on insects fallen to rivers, shellfish and fish. Have six to twelve large spots-like patterns (called parr mark) and have reddish center. Are also called as the queen of streams because of their beautiful body patterns. Similar red spotted masu trout also remain in rivers and have bright red parr marks that are different from this species.