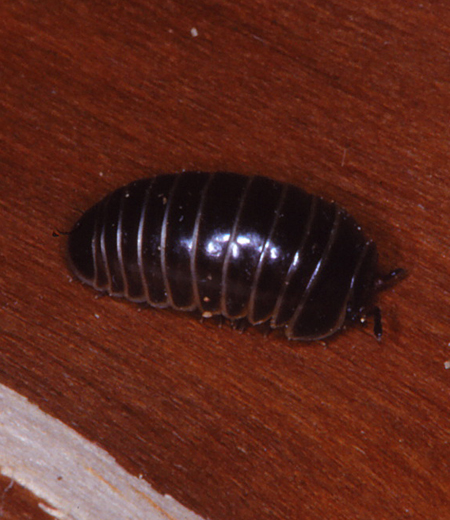 Hyleoglomeris sp.(Pill Millipedes) Glomeridae
Main Region: Honshu, Shikoku and Kyushu. Found in shady woods and green spaces from flatlands to mountains. Is a part of diplopoda family prefers wet environment such as under fallen trees or fallen leaves and also in woody parks and shrine ground even in cities but they are not well-known and often mistaken for wood louse. Body color is shiny black-brown and white on segment, creating stripe patterns. When attacked by enemies, curl into a ball with head hidden and become complete round-shape as the Japanese name of wood louse, dango-mushi literally meaning ball-shaped insects states. The species curl into a ball, wood louse is widely known but wood louse does not hide their head when curled. This species have two paired legs with four legs per segment. In Mt. Takao, often found in areas where fallen leaves sediment on forest floor and feed on decaying plants in leaf soil.