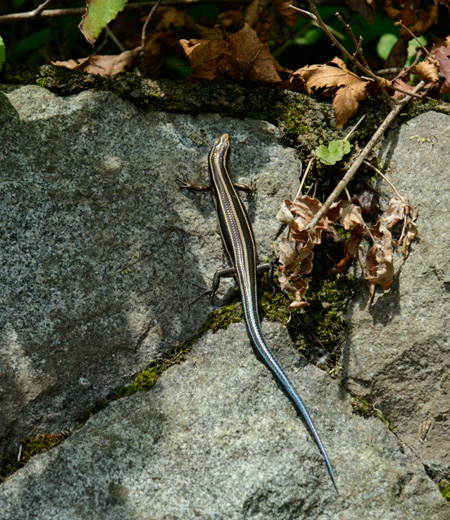 Plestiodon japonicas トカゲ科
They inhabit in eastern Japan Hosyu area from Kyoto to Wakayama except for Hokkaido and Izu Peninsula.
It was thought that they used to be the same species as Plestiodon japnicus which inhabits in western Japan, but that they turned out to be the different species in 2012,and thus the name of Plestiodon japonicus was given to the one that inhabit in eastern Japan (The name of the one for the western Japan is the same, not changed).
They dwell at the grasslands and the mountain forest from low altitudes to high land, and we can often see them sunbathe on the ground of the mountain trail and on a sunny slope at Mt. Takao.
The body is tinged with glowing brownish yellow, and smooth body surface to touch.
They have as 1.5 long a tail as their head trunk. Larva has a black body and a tail tinged with metallic blue, which makes them stand out well.
They are quick in move and very cautious, so that when they see figures of people they immediately run into within the shadows. Nevertheless, when caught by the enemies they can cut their tail themselves to run, which is called ‘Jigiri’ (cutting oneself by a part of their body).
The eat baits such as small insects, spiders, and Porcellio scaber.
In June they lay eggs and a female parent incubates eggs.