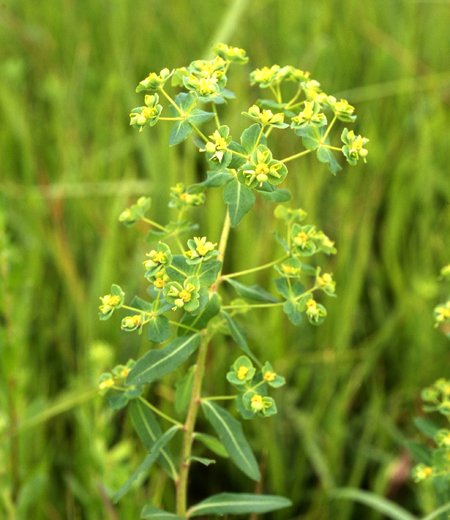 Euphorbia pekinensis Euphorbiaceae
Perennial herbs (grow for several years from their same root system) found in sunny grasslands in mountains and on hills. Is a family of euphorbiaceae, the Japanese name Taka-todai literally meaning tall lighthouse was named because the shape of this plant is tall like the lighthouse used in the past. Leaves are elongated oval shaped, 3 to 8 cm long and in whorls of five (three or more leaves around the stem at each node) and several peduncles grow from the center and bloom yellow-green flowers. Flowers are like buds covered by bracts (transformed leaves at the base of flower) and have no petals and calyx. Have four yellow protrusions called leaf glands that produce nectar and have some stamens and one pistil inside. Have white and poisonous juice when cutting leaves and stems causing skin irritation at a touch and vomiting when leaves are eaten by mistake. Fruits have red wart-like protrusions and split open and drop seeds when ripen. Leaves turn red in autumn.