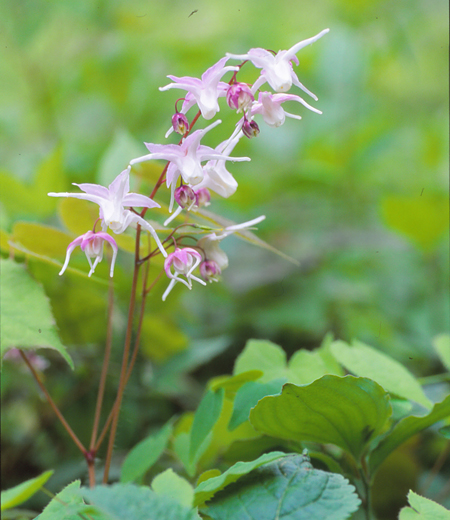 Epimedium grandiflorum var. thunbergianum(Barrenwort) Berberidaceae
They are perennial plant that grows in the depth of or within forest of mountain district (perennial plant takes several years to grow). The Japanese name ‘Ikai-sou’ is named after the flower shape that looks like an anchor of ships. The flower is pale purplish crimson 2 cm in diameter and 4 flower petals bloom that have long spur - tubular extension at the base of the corolla at the tip of stem. Spur is 1.5 to 2 cm long and stores honey. Leaves are 3 to 8 cm long and crooked egg-shaped with spiny sawtooth at the edge. Their leafstalk consists of three separate portions, which grow to have leaves each. This is why they are also called ‘Epimedium grandiflorum’. Their underground stem spread its roots, where roots like the mustache sprout. From way back people have utilized the root as a medicine of tonic. After the flowers wither, they bear seeds like pod peas or beans. The seed has white strophiole or caruncle as a fatty mass that ants love so much to bring the seed to somewhere.