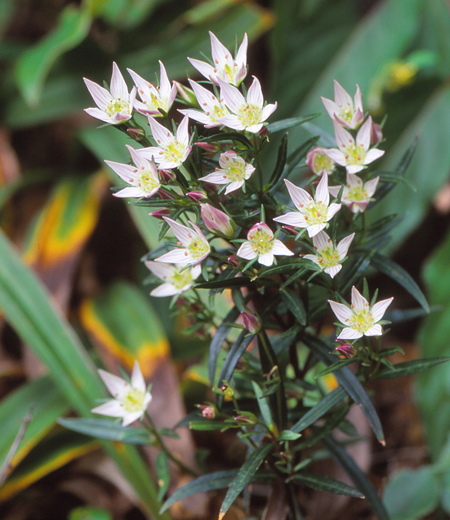 Swertia japonica Gentianaceae
They are a biennial grass that grows at arid grasslands along the ridge (biennial grass: he plant which sprouts in autumn, passes the winter, and then blossoms in the next spring). The stalk is circular in cross-section and mostly tinged with purple color with the root split into several stalks. As an old-established method, they are utilized as gastrointestinal agent. Entire plant is dried and grounded to be brewed to produce the agent, but it is said that even if this gastrointestinal agent brewed 1,000 times, they taste bitterest. This is how they are named ‘Swertia japonica’ (Senburi). (Furidasu means the agents in the bag is soaked into boiling water and is brewed.) They bear some white flowers which have pale purple-tinged stripes at the side of a limb and leaf. The flower is about 1.5 cm in diameter, and the flower petal is deep split into 5 to be star-shaped. At the knuckle inside of it, there are elliptical-shaped floral nectaries for each, where they grow long trichome. The leaves are thin and long about 2 to 4 cm long and grow alternative. On occasion, they are tinged with purple with the edge a bit rolling outward.