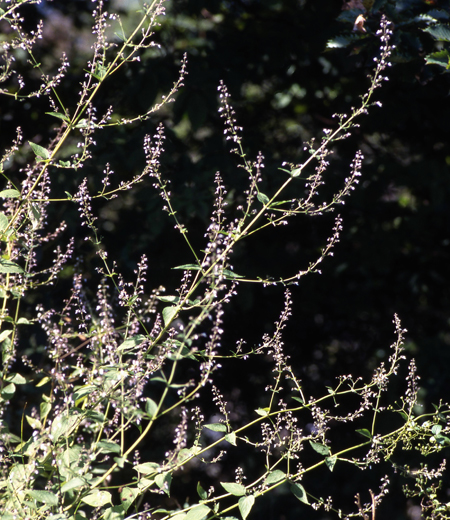 Rabdosia japonica Labiatae
They are perennial plant that grows at the grasslands and in the forests in the hilly areas. (Perennial plant takes several years to grow). The stalk is circular in cross-section and dense glandular trichome grows downward in clusters. According the legend, the bitter flavor of the leaf is so strong that it makes even fallen sick man lifted up. And that the name is also related to KOUBOU-DAISHI. He gave the squeeze of this leaf to the fallen holy man, the holy man gets well. Furthermore, it is said that the longer the one lives, the better the medicinal benefits gets, and thus they are also named ‘Plectranthus japonicus’. It is also said that entire grounded grass powder works for stomachache and stomach upset. The flower is about 5 to 7 mm long, almost whitish pale purple, and grows on the side of the top of the branch and the leaf. The upper flower petal is just upright with the shallow tip, split into 4, and patterns of dark purple color. The bottom petals thrust their heads forward to cover a long male stamen and a long female stamen. The leaf is wide egged-shaped about 6 to 15 cm long, and grows opposite each other on the stalk with the same long sawtooth (Kyoshi: tooth-like rough part like a saw at the root of a leaf) at the edge.