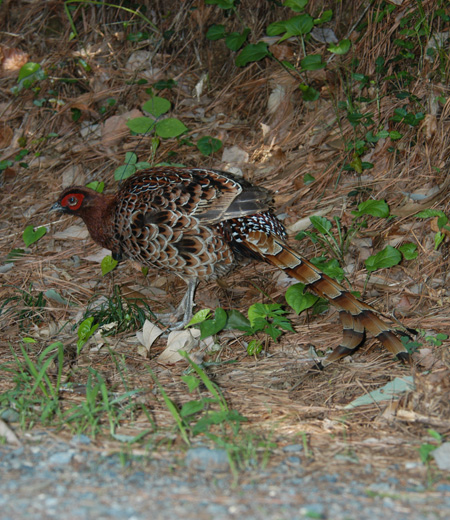 Phasianus soemmerringii (Copper Pheasant) Selected
This is in the phasianidae family only distributed in Japan. This species is larger than the Japanese pheasant and the tail of males is longer than the head and body length. Whereas the Japanese pheasant prefers sunny areas, this species prefers shady forests. The body color is brownish for both males and females that blends in the background and is not easy to find them. The voice is not too loud “coo coo coo coo”. They walk between trees and hunt for insects, earthworms, seeds of plants and trees and buds of trees. The breeding season is from April to June, males become more active and do drumming (make sound by fluttering wings and make “doo doo doo doo” sounds) to announce their territory. They build a nest in hollows of a tree by collecting fallen leaves and tree barks and lay seven to ten eggs in a season.

●Body Length (head to tail)  Male about 125 cm / Female about 55 cm
●Season  January to December (resident bird: a bird that stays in the same area all year round)
※Quotation from Mount Takao formula application
もっと見る 閉じる