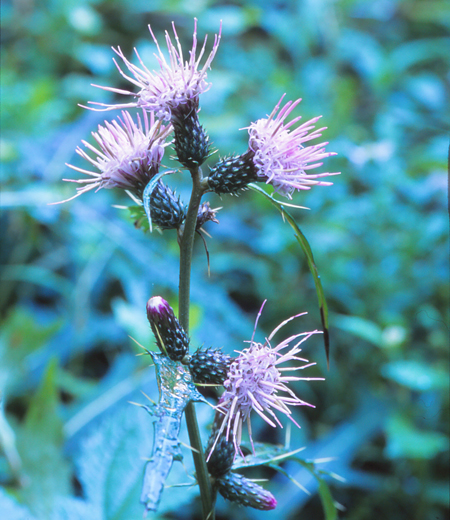 Cirsium microspicatum Compositae
They are a perennial plant that grows in the pool of the forests and in the forests, and along the mountain streams in a mountain district (Perennial plant takes several years to grow). While Cirsium spicatum (Yama-azami) inhabit in Kyushu and Shikoku regions, they grow much in Kanto (ancient name is Azua) region. This is why they are named. The flower consists of lots of dense small flowers in cluster, which is capitulum (Touka: a flower consisting of small dense tubular flowers), and 1 to 3 of them bloom downward at the top of the stalk. The flowers are tinged with red-purple with a cylindrical involucre (Soho: a portion like a bud to cover). The cylindrical involucre is about 1.5 cm long with dense trichome and sticky a little. The leaves grown from the stalk are thin and long about 20 cm long, split pinnately (Ujo: leaves like bird’s wings, a pinnately compound leaf) with the sharp top and the prickled edges. The radical leaf (KON-SEI-YO: leaf spring up from the place about stalk root) bears white-tinged patterns on it, and withers during the blossom season. When the blossom season is over, they produce the seed with white cottony trichome around it. In the winter, we can see ‘Shimobashira’ (ice column). This is caused by the liquid inside the withered stems get frozen to be swollen. Consequently, ice columns are like an ice bloom.