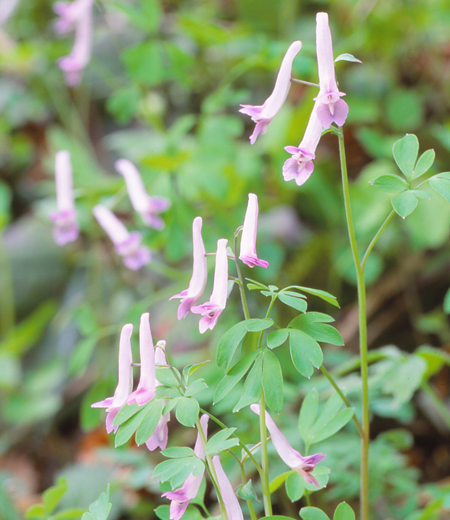 Corydalis decumbens Papaveraceae
Perennial herbs found in bright forests and at forest edges in mountains and open fields. Similar to corydalis lineariloba, but this plant is easily identified with slightly thin flowers and untoothed bracts. The Japanese name Jirobo-engosaku was named because viola is called “Taro-bo” (the first son in the family) in Ise region, and this plants was named “Jiro-bo” (the second son in the family). This is because people used to call this flower with endearing feeling as children played by crossing elongated parts from corolla including spur and pulling to see which is strong. Flowers are tubular and 1..5 cm long. The color of flowers is red-purple to blue-purple and white in rare cases. Have several thin stems grow upright from a thick underground stem. Leaves on stems have patterns and in whorls of three and egg-shaped.