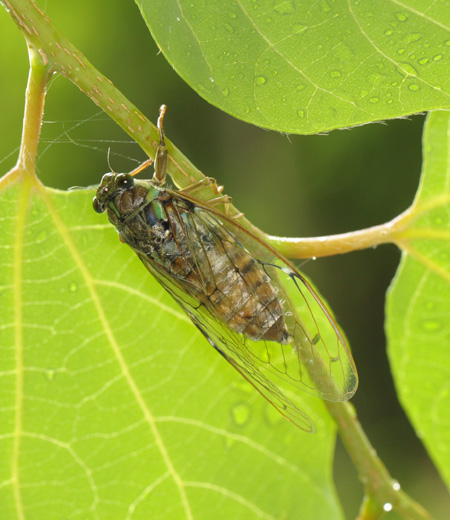 Tanna japonensis Cicadidae
They live in southern part of Hokkaido, main land Honsyu, Shikoku, Kyusyu as well as Yakushima Island.
They inhabit mainly in copse in plain ground and at the low mountain areas.
They are the kind that show up rather early season like June, and the breeding high season comes at most in July.
They chirp with accordance with their name ‘Hi-Gu-Ra-Shi’ (Evening cicada) at evening twilight time, such as metallic chirping ‘He-He-He-He-He…’.
Their chirp is often expressed as ‘Kana-Kana’ literary. Very early morning at the breaking dawn when it’s still in the darkness or when it comes to cloudy day, they chirp even during daytime.
The body color depends upon each one, but most of them have the dark reddish-brown base color with patterns of green and black here and there.
Most male have large swollen abdomen that is air bag, while female is sharp rear due to ovipositor (tubular organ used for laying eggs).
Sometimes we notice that white cotton like thing adheres to them; this is larva of Epipomponia nawai that parasite original breed.