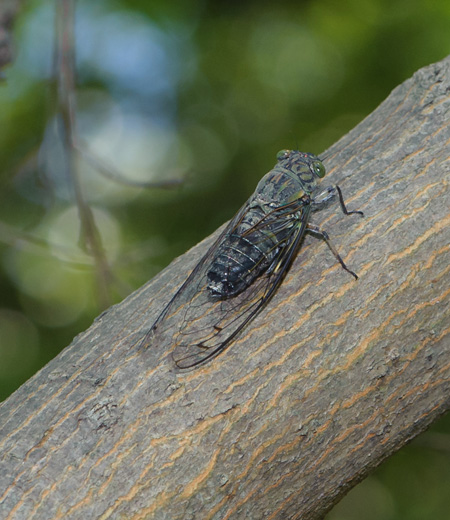 Meimuna opalifera Cicadidae
They live widely in Hokkaido, main land Honsyu, Shikoku, Kyusyu as well as Tsushima Island and Yakushima Island.
Thought they inhabit at trees and copse in plain ground, at the low mountain areas.
We can see them in the public parks in residential districts or on the roadside trees.
They fly over various trees to take a sip of sap of trees.
High season for them to appear so often is August to September.
What’s impressive is their chirp ‘OH-SHE-TSUKU-TSUKU’ with unique inflection in it and they are named after this sound chirp. It does not matter to them when to chirp, in the morning or in the afternoon.
The body color is yellowish-brown and black with green patterns here and there.
As of the similarity and difference between male and female, both of them are almost same body size, male has round shaped abdomen due to air bag meanwhile female has sharp shape of rear due to ovipositor (tubular organ used for laying eggs).