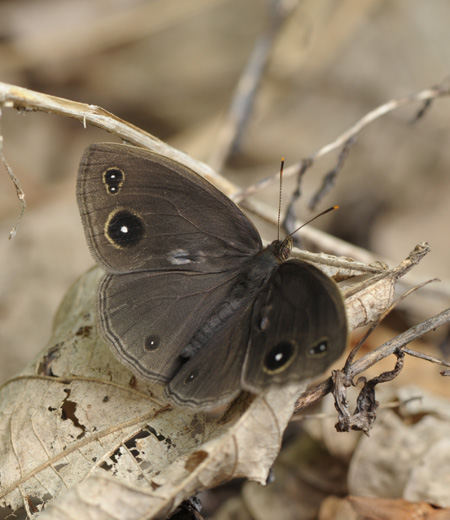 Mycalesis francisca (The Lillacine Bushbrown) Nymphalidae
Main Region: Honshu, Shikoku and Kyushu.
Found in shady forests and bushes from flatlands to low elevations.
Wing color on the front is black-brown to light gray-brown and on the back is lighter color on edges outside of purplish belt-like patterns.
Eyespots on the front are two to three on fore wings and some have them on hind wings, and on the back are three on fore wings and six to seven on hind wings.
Are active during daytime and fly around trees, plants and flowers.
Feed on sap of quercus acutissima and quercus serrata and also dungs of animals and hardly on nectar of flowers.
Caterpillars feed on leaves of plants in poaceae family including oplismenus undulatifolius, Microstegium vimineum (Trin.) and miscanthus sinensis.