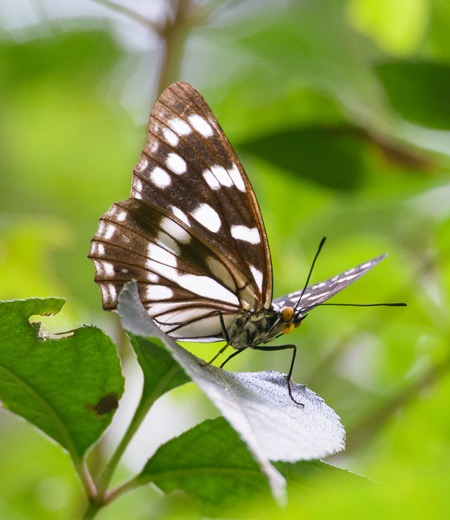 Hestina persimilis japonica (Siren) Nymphalidae
Main Region: Some parts of Hokkaido, Honshu, Shikoku, Kyushu, Sado Island and Tsushima.
Found in woods and green spaces from flatlands to low elevations, and also at parks and farmland in cities.
The front of wings is black with many irregularly placed white spots.
Has similar patterns on the back but color is rather brown.
Face feature is unique, compound eyes that comprise of numbers of ommatidia and colored orange.
Mouth is bright yellow and very appealing.
During the daytime, flies over woods and surrounding areas.
Fly to rotten fruits and often suck water on the ground.
Caterpillars feed on leaves of Chinese hackberry and celtis jessoensis.
Lately, a foreign specie, hestina assimilis with red spots on hind wings is seen in many places that is supposed to be seen only in Amami Island.
It is considered that this is man-caused and become an issue in Japan.