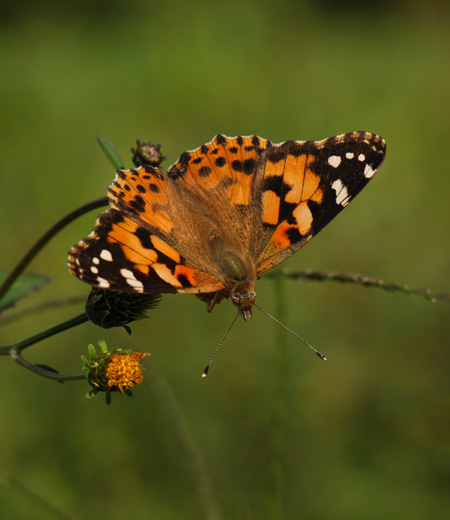 Vanessa cardui (Painted Lady) Nymphalidae
Main Region: All over Japan, Hokkaido, Honshu, Shikoku, Kyushu and Nansei Islands.
Found in sunny grasslands from flatlands to mountains at wide range of areas such as open fields, parks, from cities to suburban areas, in farmlands and riversides.
Similar to vanessa indica found in Mt. Takao, but the color of this species is less reddish on the hind wings.
Back of wings is also similar to vanessa indica but this species have more white parts and look rather white.
During the daytime, fly fast over grasslands and gather at flowers of dandelion, cirsium and cosmea for nectar.
Caterpillars feed on leaves of mugwort and edible burdock.
Sometimes are heavily infested at edible burdock farms and cause damage.