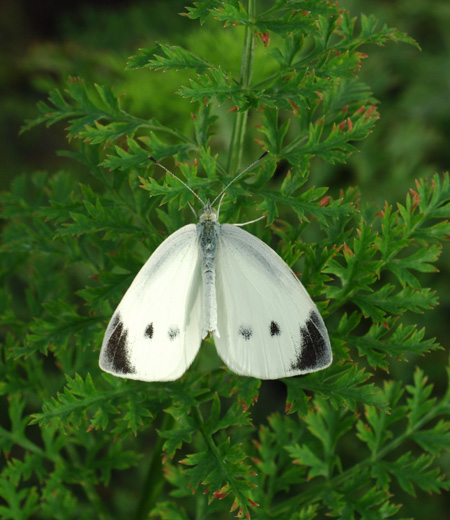 Pieris rapae (Small White) Pieridae
Main Region: Hokkaido, Honshu, Shikoku, Kyushu, Okinawa and islands including Yaku Island and Ishigaki Island.
Found in sunny forests and grasslands from flatlands to low elevations.
Are well known for the caterpillars feed on leaves of cabbages and often seen around farmland, riverbeds and even at parks in cities.
Main foods for adults are nectar of annual fleabane and dandelion.
Fly over farmlands or open green spaces for nectar of flowers.
Wing color is white on the front with distinct black spots in the middle of fore wings.
Is yellow on the back but female has deeper color than male.
Is seen from early spring to late autumn.