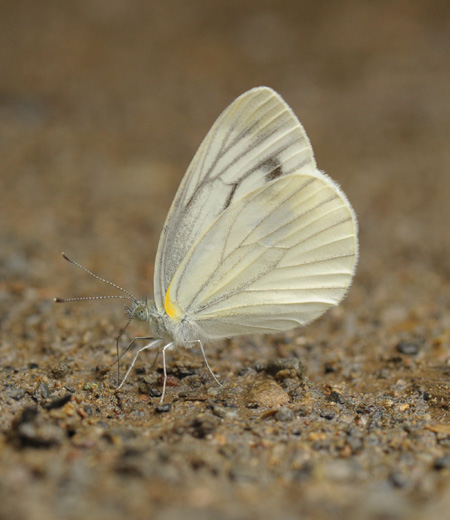 Pieris melete Pieridae
Main Region: Hokkaido, Honshu, Shikoku, Kyushu, Yaku Island and Tanega Island.
Found in various kinds of places including green spaces and streamsides in forests from flatlands to mountains, in cities, parks and farmland.
Wing color is white on the front and white to light yellow-white on the back.
Similar to small white, but this species can be distinguished by the distinct black lines along wing veins, hence its Japanese name Sujiguro-Shirocho literally meaning black line white butterfly.
During daytime, fly over grasslands or riversides and feed on nectar of dandelion and boneset.
Is seen from cherry blossoms season.
Caterpillars feed on leaves in brassicaceae family including variableleaf yellowcress.