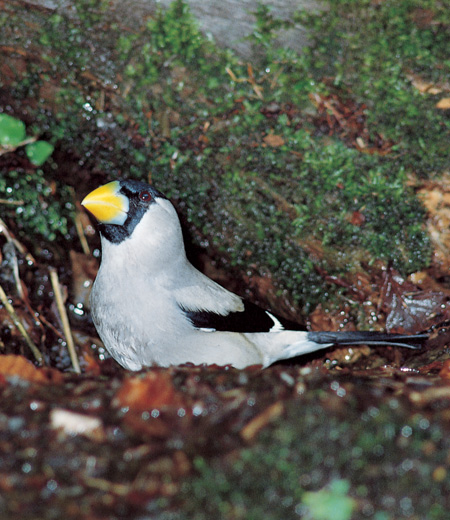 Eophona personata (Japanese Grosbeak) Selected
Live in forests from flatlands to low elevations and found in Mt. Takao throughout a year. The color of body for male and female is almost the same and black head, long tail and thick and large yellow bills are distinct. Chirp like whistles but also sounds like “tsu kee hee ho shi”, thus it is sometimes called as Japanese paradise flycatcher. Mainly live on trees and feed on soft fruits and buds of trees including aphananthe and Chinese sumac. Sometimes jump on the ground and feed on seeds of plants. Hard seeds are cracked using bills. The breeding season is from mid May to early July. Build a cup-shaped nest with stems and roots on branches of tall trees and lay three to four eggs in a season. From autumn to winter, come down to woods and croplands near residential areas to hunt for preys.

●Body Length  about 23 cm
●Season  January to December (resident bird, bird that stay in the same area all year round, and wandering bird, bird that have different areas for breeding and spending winter)