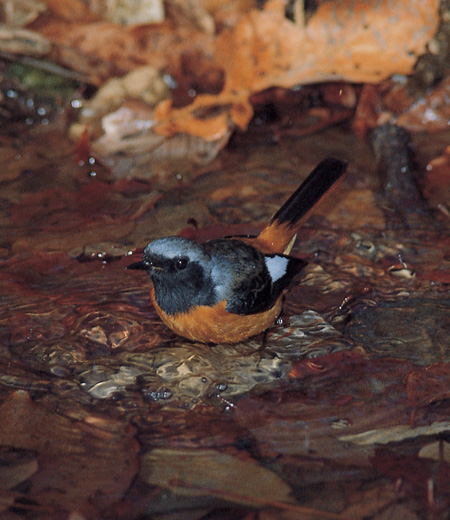 Phoenicurus auroreus (Daurian Redstart) Selected
Come back to Japan in autumn from breeding ground in Siberia to spent winter. Live in open spaces including forests in low elevations, riverbeds and parks. The body color of male is silver on the head and the back of neck and distinct orange on abdomen. Stand on branches and stakes and chirp sounding like “he he” right after they arrive Japan to announce own territory. Also chirp sounding like “qua qua” after bowing and swing a tail. This sound is similar the sound hitting flints, hence the Japanese name hitaki for birds in muscicapidae family and it literally means to start a fire. Live alone and hunt for insects and spiders and also feed on fruits of Japanese spindles and pyracantha. Fly back north for breeding in early spring.