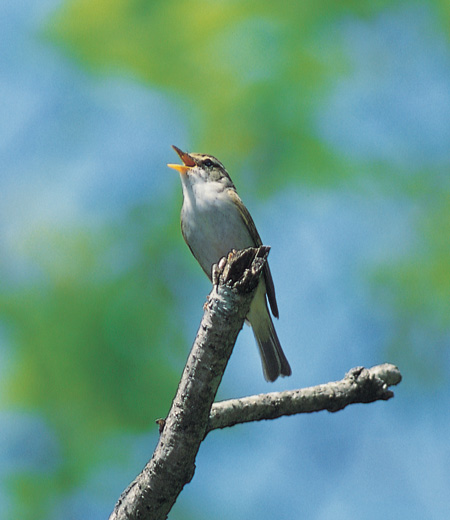 Phylloscopus occipitalis (Crowned Willow Warbler) Selected
Fly back to Japan in spring from Southeast Asia where they spent winter. Live in broad-leaved forests including quercus serrate and maple trees in low elevations but found them at parks and residential areas from spring and autumn. The body color of male and female is almost the same and dark green from head to back with white cocoon like long line. Move frequently on branches and feed on bugs and spiders on leaves and branches. The breeding season is May to June and chirp sounding like “cho cho bee” on trees, also sounding like “sho-chu-ippai-gubi” in Japanese (one more cup of shochu). Build a ball-shaped nest with the entrance is tilted open by collecting fallen leaves and plants. Lay five to six eggs in a season.

●Body Length  about 13 cm
●Season  April to October (Summer bird, fly to one area from spring to summer for breeding and fly back to southern areas in autumn.)
※Quotation from Mount Takao formula application
もっと見る 閉じる