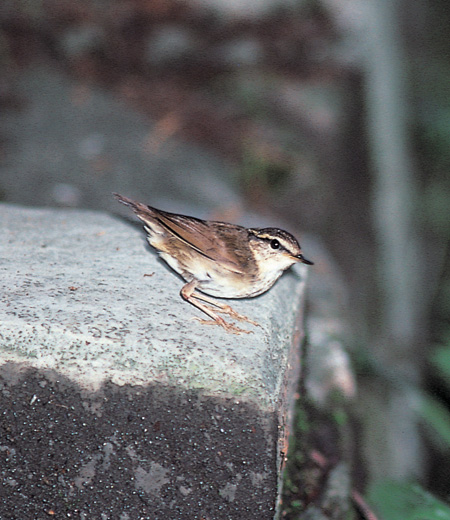 Cettia squameiceps (Short-tailed Bush Warbler) Selected
Fly back to Japan in spring from Southeast Asia where they spent winter. It is difficult to find as they live in shady forests with sasa leaves and hardly ever come out from there. Live alone except breeding season and walk and jump around to hunt for bugs and spiders just like rats do. The body color of male and female is almost the same with brown body, cocoon like white belt-like patterns and have short tail. The breeding season is from May to July and male chirp sounding like ”shin shin shin” like insects and for alerting, “cha cha” in own territory. Build a cup-shaped nest with moss and fallen leaves at the roots of trees and dip on the ground and lay five to seven eggs in a season. In autumn after nestling, fly to south.

●Body Length  about 11 cm
●Season April to October (Summer bird, fly to one area from spring to summer for breeding and fly back to southern areas in autumn)
※Quotation from Mount Takao formula application
もっと見る 閉じる