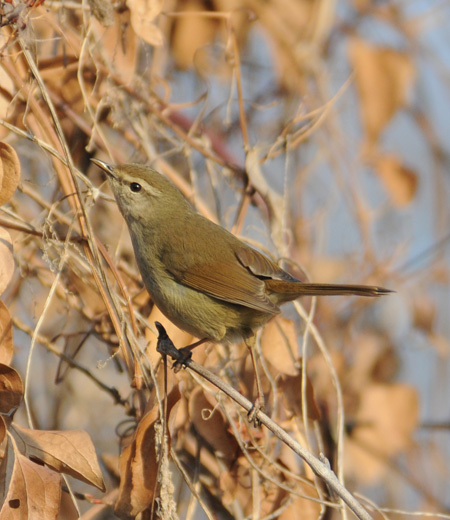 Cettia diphone (Bush Warbler) Selected
Are famous for their chirp sounding like ”Hō-hoke-kyo”. This is a male announcing own territory. Except this season and female normally chirp sounding like “cha cha cha”. Found in shrubs, forests and grasslands from flatlands to mountains and sometimes at parks in cities. The body color of male and female is almost the same, with grayish green body and light gray belt-like pattern above eyes. Live normally alone except breeding season and feed on bugs and spiders and fruits including persimmons. Rest placing a body horizontally to branches and change where they are looking by moving tails with rhythm. Fly in shrubs but does not fly long distance. The breeding season is from April to August. Build a ball-shaped nest with sasa leaves and dead Japanese pampas grass and lay four to six eggs in a season.

●Body Length  about 15 cm
●Season  January to December (resident bird, bird that stay in the same area all year round.) or nomadic bird)