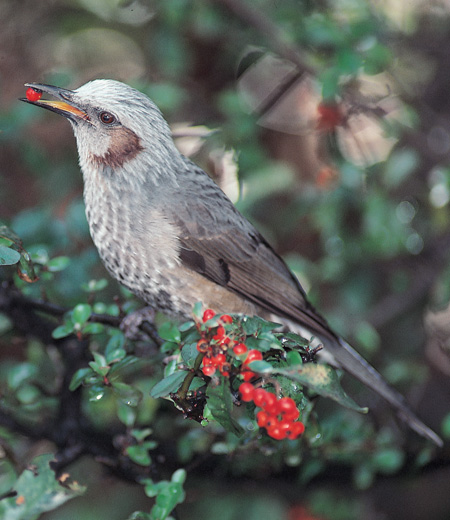 Hypsipetes amaurotis (Brown-eared Bulbul) Selected
Found in forests from flatlands to mountains and also often seen in cities. Chirp loudly sounding like “hi hi heeyo heeyo”, hence the Japanese name Hiyo-dori. Mostly live on trees and hardly ever come down to the ground. Feed on fruits, nuts of trees, flowers, nectar, insects, chicks and lizards. Originally raise chicks from spring to summer in mountains and come to warm flatlands from autumn to winter but more and more species do live in cities or at parks throughout a year. The breeding season is from May to July. Build a nest with dead leaves and twigs and lay four to five eggs in a season. Sometimes plastic threads are used to build a nest. Are in a group of hundreds and fly short distance to the warmer areas (change habitats by season).