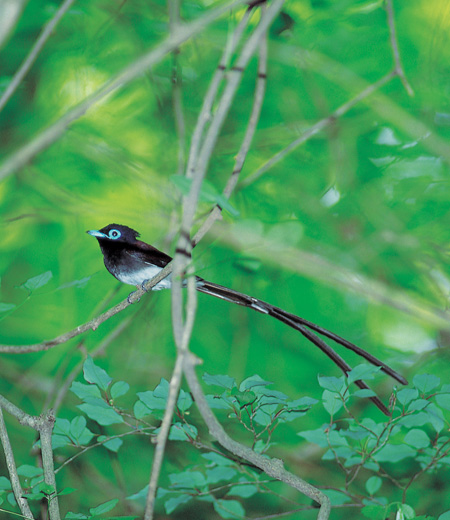 Terpsiphone atrocaudata (Black Paradise Flycatcher) Selected
Fly back to Japan from Southeast Asia where they spent winter around April and breed in forests from flatlands to mountains. Chirp “two hee hoo shee hoi hoi” sounds like “Moon and star hoi hoi” for most of Japanese, hence the Japanese name is San-ko-chu literally meaning three lights birds. Around eyes and a bill is bright blue. Long tail is three times as large as body length for male and female have short tails. Are active in shady forets and hunt for insects and spiders in the air and at the tips of leaves. Build an upside down conical-shaped nest with moss, barks and threads of spiders. Lay three to five eggs in a season.

●Body Length  Male about 45 cm, female about 18 cm
●Season  April to August (Summer bird, fly to one area from spring to summer for breeding and fly back to southern areas in autumn.)