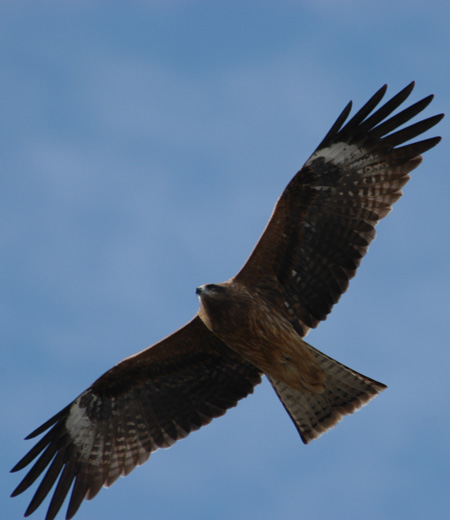 Milvus migrans (Black Kite) Selected
Is in a accipitridae family found at lakes, riverbeds and cities. Chirp “peep hyo lo lo lo” while hovering in a round route. Also known as tombi in Japanese. Is normally in a group except breeding season and hunt for preys from early in the morning. Feed on dead animals, fish, insects and frogs and sometimes raid garbage. The body color for male and female is almost the same and adults have dark-brown body. When looking up the sky while they are flying, their trapezoidal-shaped tails are clearly seen. The breeding season is from March to May and mostly in pairs and chirp frequently. Build a large sized dish-shaped nest with layers of twigs on a tall tree. Lay two to three eggs in a season.