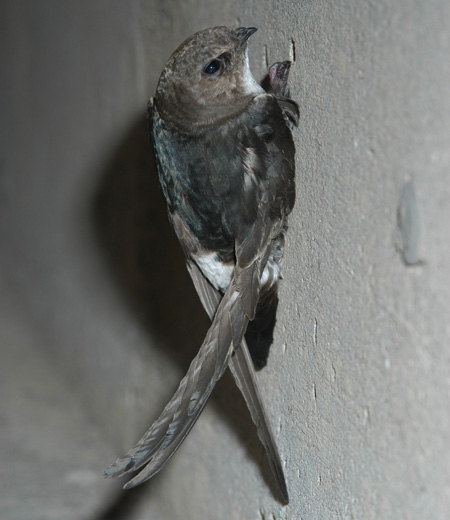 Apus affinis (House Swift) House Swift
Are small sized pacific swift and was not in the old illustrated bird book in Japan. This species is observed from 1960 (Showa 35), and first confirmed them of breeding in 1967 (Showa 42). After that, are increased in number and also found them in Tama area and Tokyo 23 wards area. Chirp “chu li li li” and hunt for flies and mosquitoes in the air. Build nests with muds and feathers on the concrete walls underneath the elevated railways and roads. Sometimes borrow nests of house martins. The breeding season is from April to June and lay two to three eggs in a season. Birds in apodiformes order are the ones able to stretch four toes forward which enable this species to rest on vertical concrete walls.