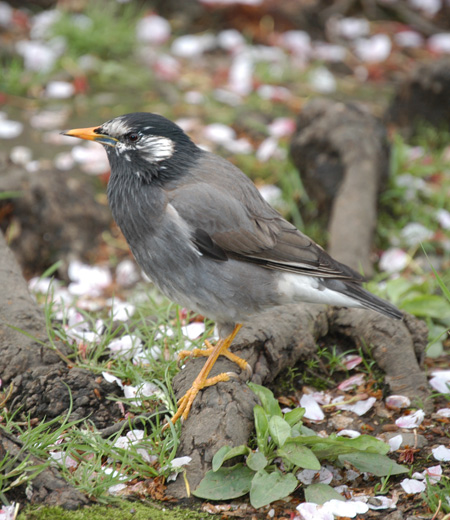 Stunus cineraceus (Grey Starling) Grey Starling
Is most commonly known birds found in riverbeds, croplands and bright forests and even at parks in cities. Have distinct orange bills and legs. The body color is dark gray like black with white cheeks. Male have black head and female have gray head. Are in a group throughout a year and go back to the same place to rest at night. Often see them flying back to the place tends of thousands of them in groups in late afternoon from autumn to winter. Feed on earthworms, fruits and nuts of trees and often gather around areas where it is right after trimming grasslands or bushes. Nest in a hole in a tree with twigs and feathers but sometimes spaces in wall of residence or door case and even in a bird box. The breeding season is from March to July and lay five to six eggs in a season.