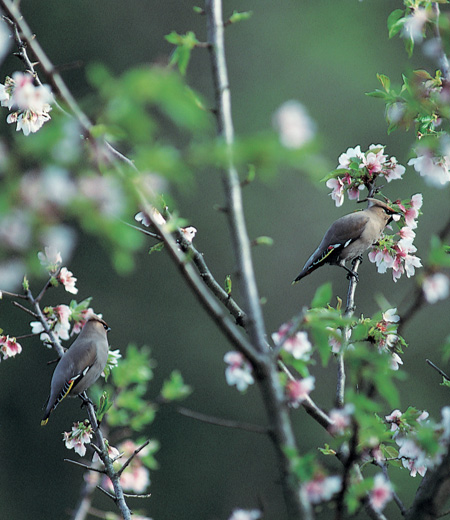 Bombycilla garrulous (Waxwing) Japanese Waxwing
Come back to Japan from breeding ground in Siberia to spent winter. Fly to forests in flatlands to mountains in Japan around October. Live mostly in northern Japan and in Hokkaido found them at parks and street trees in city areas. They body color for male and female is almost the same and reddish brown with yellow belt-like patterned black tail. Have crown-like feathers that stand upright when they are alarmed or threatened. Are often in a group and rest on broad-leaved trees and chirp “tinkle tinkle tinkle” like a bell. The favorite is nuts of trees and feed on various kinds including mistletoe, ligustrum obtusifolium and Japanese rowan. Also catch insects during flight. Number of species fly to Japan varies each year and sometimes there are not much returned at all.

●Body Length  about 20 cm
●Season  October to May (Winter bird, fly to Japan in autumn and spend winter and fly away in spring.)
※Quotation from Mount Takao formula application
もっと見る 閉じる