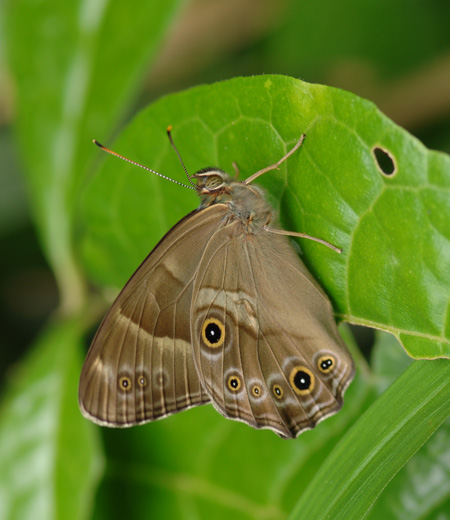 Lethe sicelis Nymphalidae
Main Region: Honshu, Shikoku and some parts of Kyushu.
Found in bushes and woods from flatlands to low elevations.
Similar to the Diana treebrown but this species have slightly light brown colored wings.
Fore wings are with white belt-like pattern.
Have even lighter brown color on the back.
Have eyespots (eyelike markings) like lethe diana, one or two small ones on the front and six various sized ones on the back.
These eyespots are unique to satyrinae family.
Having light base color makes these patterns appear more distinct.
Fly around forests during daytime but become even more active in late afternoon to sunset.
Feed on tree sap of quercus acutissima and quercus serrata.
Caterpillars feed on leaves of Japanese timber bamboo and arundinaria ramosa.