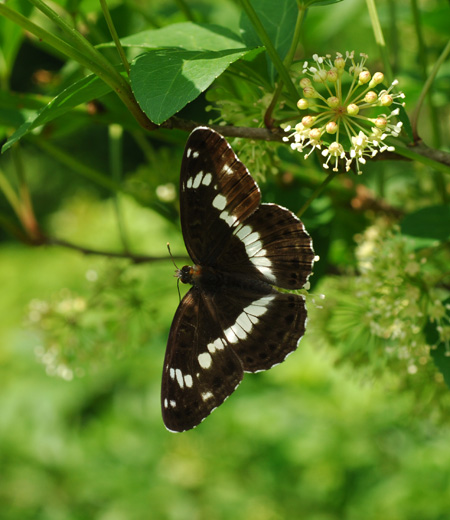 Limenitis camilla (White Admiral) Nymphalidae
Main Region: Hokkaido, Honshu, Shikoku and Kyushu.
Found in woods and green spaces from flatlands to mountains.
Japanese name Ichi-monji-cho literally meaning one straight line butterfly is named because it has white belt-like patterns in the center of each wing that is very distinct.
The back of wings is red-brown and also have white belt-like pattern along with black spots.
Female body is larger than male and wings are round edges that are to distinguish them from male.
During daytime, fly slowly close to the ground in sunny open grasslands and fly over to flowers of Japanese honeysuckles and clethra barbinervis for nectar.
Caterpillars feed on leaves of plants in caprifoliaceae family including Japanese honeysuckles, lonicera morrowii and Weigela coraeensis.