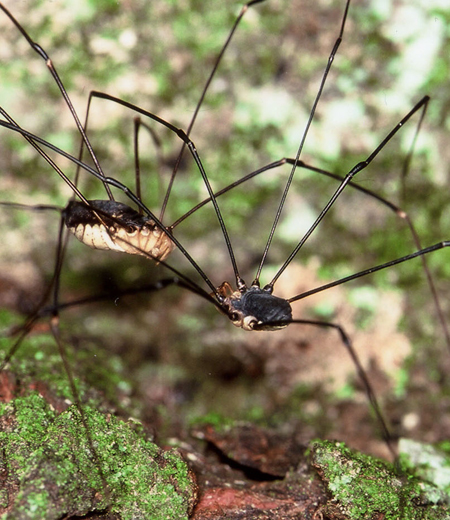 Nelima genufusca Sclerosomatidae
Main Region: Hokkaido, Honshu, Shikoku and Kyushu. Found in woods from low elevations to mountains and are easily found in these environments. The species in opiliones have small body like a bean with disproportional eight long legs. It is often mistaken for a group of spiders but does not have segment between cephalothorax and abdomen (the body looks only have one part) and does not emit thread. Have only two eyes. The body size is larger than palm of adult human being when legs are extended and body color is mostly black except white abdomen part with stripe patterns become more distinct. In Mt. Takao, this species are often found on trees and grass. In late autumn, often seen male and female together or walk slowly on the ground. Feed on small insects and earthworms and fermented fruits with lots of moisture that is fell on the ground.