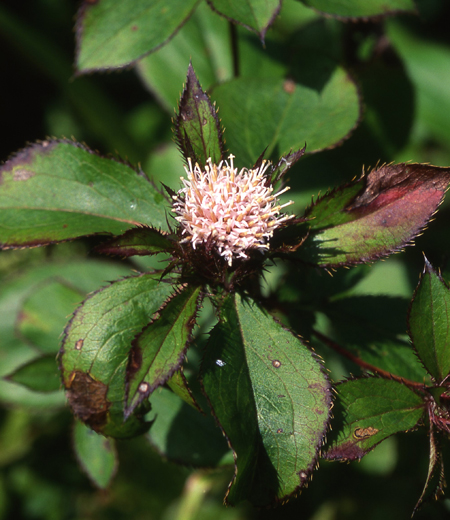 Atractylodes japonica Compositae
They are a perennial plant that grows at the arid places such as along the ridges and in the grasslands at the mountain area (Perennial plant takes several years to grow). The stem is thin, hard, and has white pubescent at first. It is said that their ancient name is Ukera (Atractylodes japonica Koidz) and has come in Manyosyu (one of the most renowned collection of poems, compiled in the 8th century), and that this ancient name is accented into a current name Okera (Atractylodes lancea DC.). The flower consists of apitulum (Touka: a flower consisting of small dense tubular flowers) of small tubular flowers in cluster, about 2 cm long, tinged with white color, rarely some are pale showy pink. Their characteristic is that involucre (Soho: a portion like a bud to cover) growing below the flower has phyllary (Soho-hen) which seems to be fish bone. The leaf is tubular about 5 to 6 cm long, hard feeling to touch, split into 3 to 5, and with stingy sawtooth at the edge (Kyoshi: tooth-like rough part like a saw at the root of a leaf). When the flowers wither, they bear the seeds with a feathery trichome around them. Young leaves are edible as boiled food after boiled or fried into Tempura. The root has been utilized for gastrointestinal agent.